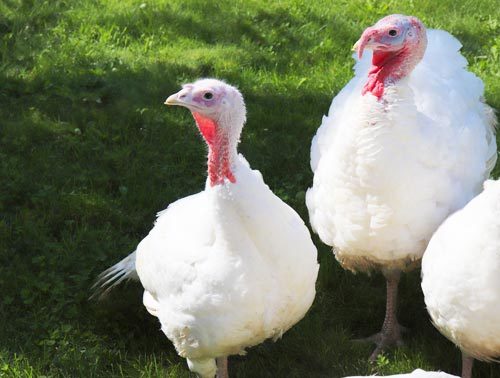 Do you know what's in YOUR turkey?!

Are you being spoon fed antibiotics without even knowing it?

While you may not have a prescription bottle in your medicine cabinet, you just might have some deli meat, turkey jerky or hot dogs in your fridge.

If so, you’re consuming a lot more antibiotics than you realize. In fact, the FDA admits that 80% of antibiotics sold in the United States are used on factory-farmed animals like turkeys.

Because turkeys raised in factory farms are exposed to unsanitary and overcrowded living conditions.

In fact, most conventionally raised turkeys never even see pasture! All they know are the 4 walls of a jam-packed barn filled with up to 10,000 turkeys – it’s an absolute breeding ground for bacteria and disease.

And just like we get sick in unsanitary living conditions, so do they.

In an attempt to keep disease under control, turkeys are fed a corn-based diet laced with antibiotics.

When they go to slaughter, they still have those antibiotics in their bodies, and when you eat them, they’re transferred straight to you.

All ethics aside, here’s what that means for your health:

First, antibiotic use in factory-farmed meats has been linked to unexplained weight gain in humans and even more frightening – antibiotic resistance.
Continued exposure to antibiotics has created “superbugs,” or illnesses that don’t respond to antibiotic treatment. Consuming such meat is literally destroying our bodies’ ability to fight infection.

Many farmed turkeys are also fed soy. Along with corn, soy tops the list of the nation’s largest GMO crops.

Third, conventionally raised turkeys are often injected with additives you would never want to eat. The most alarming of these include growth-promoting hormones, which have been found to cause:

When you eat pasture-raised birds, on the other hand, there’s no risk for scary infections and other unwanted side effects.

When birds are free to roam and given plenty of space to live normally, they lead much healthier lives.

Guess what that means? They don’t need antibiotics! (And they don’t pass them on to you.)

But that’s not the only benefit of choosing pastured poultry.

Turkey that is allowed to graze freely contains far more nutrients than factory-farmed turkey. In fact, pastured turkey has increased levels of:

This is all thanks to a turkey’s naturally omnivorous diet. When given a choice, they prefer bugs and plants, which contain far more vitamins and minerals -- and they pass those nutrients straight to you.

If its nutrient profile wasn’t enough to convince you, let’s talk about taste.
Did you know conventional turkeys are so devoid of natural taste that they have to be injected with a sugar and salt solution just to make them palatable?

Pastured birds don’t need anything like that to enhance their flavor because they consume a proper diet and are given the freedom to be as active as they wish.

So they taste better, and you don’t have to worry about all the antibiotics, saline, hormones and risk of infection from being raised in unsanitary conditions.
Whether you’re preparing for a Thanksgiving feast or just grabbing a deli sandwich, go for pasture-raised turkey & avoid all those harmful additives.

And if you love beef sticks or turkey jerky, you're in luck because our brand new 100% pasture-raised turkey sticks are finally here.

Just like our beef sticks, they’re the perfect snack on the go, providing all the meaty savor you love with no gross ingredients.

So what are you waiting for? Just click the link above or below to order your AIP Approved 100% pasture-raised turkey sticks! Can’t wait for you to try them!