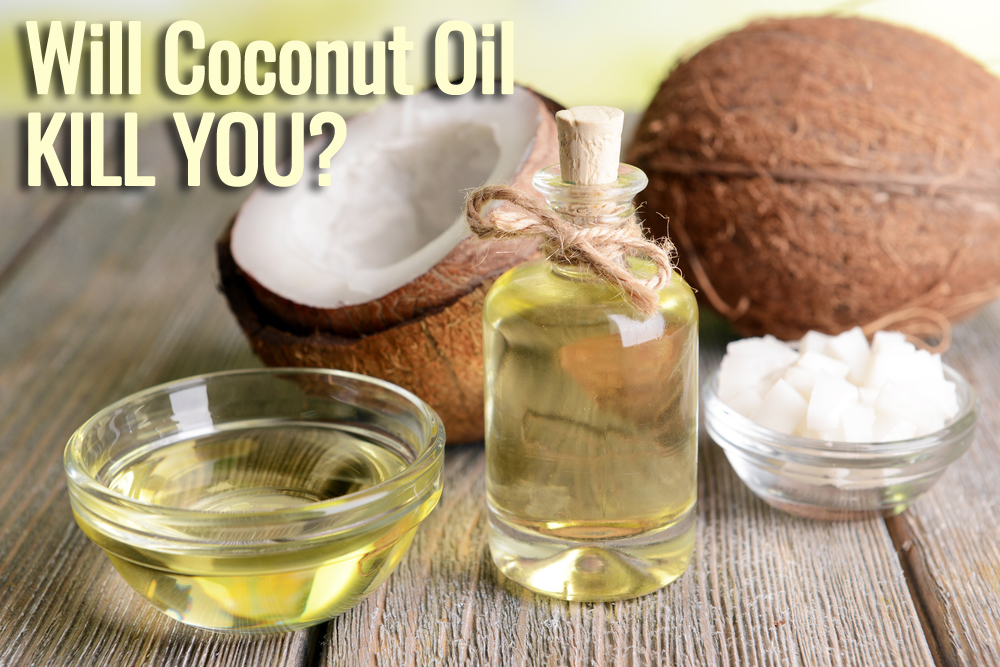 Will Coconut Oil KILL You?

The TRUTH about WHICH oils to consume!

Have you been confused by the recent headlines claiming that coconut oil can increase the risk of heart disease?

And my personal favorite...

In these articles, consumers are told that if they want to reduce their risk of heart disease they should replace coconut oil with veggie oil as per recommendations from the American Heart Association (AHA).

This is INFURIATING to me for several reasons (which we'll discuss in a second), but before I delve in I want to share an actual quote from the AHA's report that has largely been swept under the rug...

"clinical trials that compared direct effects on cardiovascular disease of coconut oil and other dietary oils, have not been reported."

Well that changes things a bit, doesn't it?

The AHA's recent recommendations are NOT based on a new, tightly controlled, excellently executed trial.

In fact, just as the AHA admits in their report, NO study has investigated the direct effects of coconut oil and other dietary oils on heart disease.

Instead, the AHA's recommendations are based on a recent meta-analysis (literature review where they pool together and analyze studies on a similar topic that meet specific criteria to identify a consensus in the current research).

What you have to understand is that even though this type of research is often valuable, the trials they include and exclude dictate the results.

Therefore, when the trials being analyzed contain methodological errors the conclusions are often faulty. Unfortunately, this is one of those times.

Don't worry, I'm not going to bore you with unnecessary details of each trial.

I do, however, want to highlight one trial, the LA Veterans Hospital Study, which was supposedly responsible for the "biggest effect in heart disease reduction," just to demonstrate why the AHA's recommendations are ridiculous and harmful.

In this double-blind study participants were randomly assigned to eat in one of two dining halls: one that served polyunsaturated fats (veggies oils) with meals or one that served saturated fats (like coconut oil). After 8 years, this study reported that the veggie oil group had a reduced risk of heart disease. Sounds simple enough, right?

Shockingly, what was also found was that those consuming polyunsaturated fats (veggie oil) had an increased risk of cancer. Total mortality between the two groups was similar, it was just HOW they died that differed. Yet, this finding wasn't discussed in the paper at all.

This trial was also fairly small (under 1000 participants) which means there weren't enough participants to randomize smokers. As a result, the saturated fat group had TWICE the number of heavy smokers as did the veggie oil group.

Because we know that smoking increases the risk of heart disease, this simple oversight could be the reason for the increased heart disease risk in the saturated fat group. And in fact, it was.

When the data was re-analyzed it was found that those who died of heart disease were often the heavy smokers.

But the AHA's report didn't talk about that, did they?

Now do I think the AHA ignored these alternative findings because they have a vendetta against the American public? Nope. But I do think they are an organization of biased humans who have clearly given more weight to research confirming what they already believe (saturated fats cause heart disease) than research to the contrary.

It's also important to note that the AHA based their recommendation on the fact that coconut oil can raise cholesterol levels (specifically LDL). Which can be true. But what's NOT always true is that higher cholesterol levels cause heart disease. In fact, recent research has elucidated that many heart attack sufferers have cholesterol levels within the normal range and that in older women high levels of cholesterol may be protective.

Can you see why these recommendations make me so angry?

Veggie oil causes oxidation which causes heart disease. It’s also important to mention that coconut oil contains the fewest oxidation-causing polyunsaturated fats of any oil on the market which means it’s more likely to PREVENT heart disease than cause it.

But even aside from this awesome benefit, coconut oil has also been shown empirically to..

Oh and let’s not forget that our ancestors, like the Tokelauans, have been consuming coconut oil (and 4 times the saturated fat than the average American) with NO heart disease whatsoever. To think that the heart disease epidemic, which didn’t even begin until the mid-1950’s could possibly be attributed to coconut oil (a food we’ve been consuming for eons) is just plain silly.

The AHA's recommendation to ditch a health supportive, natural food with a long history of safe use and replace it with a man-made food linked to an increased risk of cancer and heart disease that we've only been consuming for a few decades is indefensible. Really.

So what does all this mean?

If you care really about your health and disease prevention you should do exactly the opposite of what the AHA recommended...

Nope. I’m not trying to get crazy here.

But consuming it in moderation is an excellent idea that will likely help you prevent disease, improve calorie burning, enhance brain function, and fight belly fat.

And that’s a scientifically-supported FACT.

If you’re a super geek (like me!) and you'd like an in-depth discussion regarding the issues inherent in each of the included trials, please check out Dr. Chris Masterjohn's Podcast, Is Coconut Oil Killing Us? It is VERY thorough and will make your brain hurt in the best way.

Get exclusive deals, health tips, and product updates simply by providing your email address below: