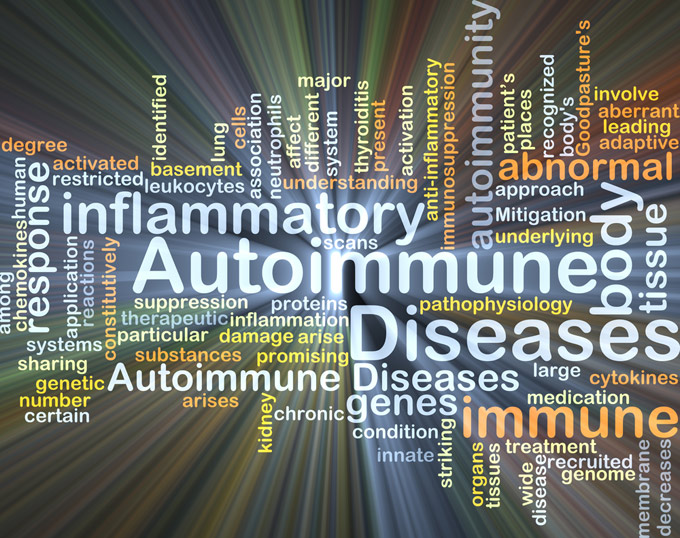 The incidences of autoimmune issues are rampant today. According to the American Autoimmune Related Diseases Association Inc., 50 million Americans currently suffer from an autoimmune disease. They are one of the top 10 leading causes of death among female children and women of all ages.

Researchers have documented between 80-100 autoimmune diseases including rheumatoid arthritis, Sjorgren’s disease, lupus, Celiac’s Disease,Crohn’s Disease, endometriosis, fibromyalgia, and Hashimoto’s thyroiditis. They also suspect that approximately 40 other diseases may have an autoimmune basis.

Many of the causes of autoimmune diseases remain a mystery.  According to an article entitled, Scientists Officially Link Processed Foods To Autoimmune Disease, a team of scientists from Yale University in the U.S and the University of Erlangen-Nuremberg in Germany now believe junk food diets could be partly to blame. Here are a few highlights.  Read the full article here.

Regarding a 2013 study entitled, Excess Dietary Salt May Drive the Development of Autoimmune Disease:

“This study is the first to indicate that excess refined and processed salt may be one of the environmental factors driving the increased incidence of autoimmune diseases,' they said.”

Why are Americans more at risk than other countries:

“U.S. fast foods are often more than twice as salt-laden as those of other countries. While government-led public health campaigns and legislation efforts have reduced refined salt levels in many countries, the U.S. government has been reluctant to press the issue. That’s left fast-food companies free to go salt crazy, says Norm Campbell, M.D., one of the study authors and a blood-pressure specialist at the University of Calgary.”

“Many low-fat foods rely on salt--and lots of it--for their flavor…Bread is the No. 1 source of refined salt consumption in the American diet, according to the Centers for Disease Control and Prevention. Just one 6-inch Roasted Garlic loaf from Subway--just the bread, no meat, no cheeses, no nothing--has 1,260 mg sodium, about as much as 14 strips of bacon.”

Here’s a supposition about the mechanism by which refined salt increases the risk for autoimmune disease:

“The team from Yale University studied the role of T helper cells in the body. These activate and 'help' other cells to fight dangerous pathogens such as bacteria or viruses and battle infections. Previous research suggests that a subset of these cells - known as Th17 cells - also play an important role in the development of autoimmune diseases. In the latest study, scientists discovered that exposing these cells in a lab to a table salt solution made them act more 'aggressively.' They found that mice fed a diet high in refined salts saw a dramatic increase in the number of Th17 cells in their nervous systems that promoted inflammation. They were also more likely to develop a severe form of a disease associated with multiple sclerosis in humans.”

Hopefully I didn’t overwhelm you with all the science. If I did, it’s just important to remember…

“Study co-author, Ralf Linker, from the University of Erlangen-Nuremberg, said: 'These findings are an important contribution to the understanding of multiple sclerosis and may offer new targets for a better treatment of the disease, for which at present there is no cure.”

But, wait! It’s important to note that not ALL salt is bad. There is a huge difference between refined salt (sodium chloride) and unrefined sea salt. Here’s why they are different…

“Our bodies are not designed to processed refined sodium chloride since it has no nutritional value. However, when a salt is filled with dozens of minerals such as in rose-coloured crystals of Himalayan rock salt or the grey texture of Celtic salt, our bodies benefit tremendously for their incorporation into our diet.”

According to Dr. Barbara Hendel, researcher and co-author of Water & Salt, The Essence of Life…

“These mineral salts are identical to the elements of which our bodies have been built and were originally found in the primal ocean from where life originated. We have salty tears and salty perspiration. The chemical and mineral composition of our blood and body fluids are similar to sea water. From the beginning of life, as unborn babies, we are encased in a sack of salty fluid."

“She believes too few minerals, rather than too much salt, may be to blame for health problems. It's a view that is echoed by other academics such as David McCarron, of Oregon Health Sciences University in the US. He says salt has always been part of the human diet, but what has changed is the mineral content of our food. Instead of eating food high in minerals, such as nuts, fruit and vegetables, people are filling themselves up with "mineral empty" processed food and fizzy drinks.”

The development of autoimmune conditions is incredibly complex. In fact, according to recent research conducted by Alessio Fasano MD, a world renowned researcher and pediatric gastroenterologist, all autoimmune conditions have three things in common: genetic susceptibility, an environmental irritant and a leaky gut. Therefore, the likelihood of a highly processed diet causing an autoimmune disease (for those who are genetically susceptible) makes sense for two reasons:

First, because processed foods contain many irritants such as chemicals, additives, and GMOs that qualify as environmental antigens.

Secondly, excessively processed diets over time can lead to the formation of a leaky gut. This is especially true if you are consuming foods you're sensitive to. In other words, if you have a genetic susceptibility, eating processed foods may be the “straw that breaks the camel’s back.”

The silver lining is that researchers have found that autoimmune conditions aren’t irreversible as once believed. Just as processed foods can increase one’s risk, a whole foods diet, devoid of irritants and coupled with a gut healing protocol, can decrease suffering considerably. If you, or someone you love, have an autoimmune condition, why not begin to take control of your health by completing an elimination diet and then adopting the paleo approach.