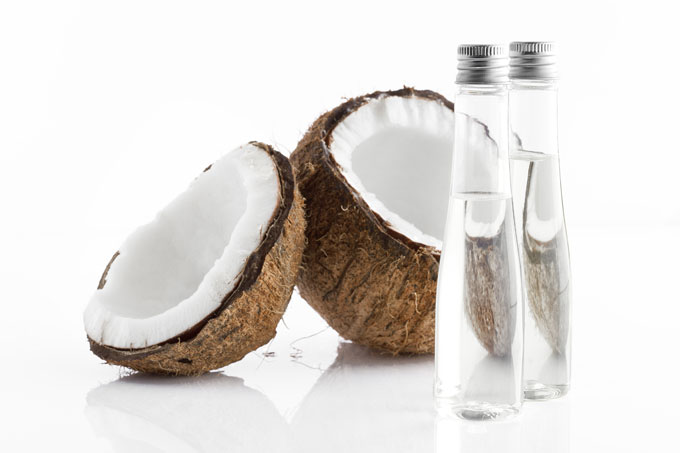 We are surrounded by a sea of information. Every expert has a different idea about what to eat for optimal health. Even if you wanted to try every recommendation, you simply wouldn’t have time.

That’s why I love research. It helps us cut to the chase and differentiate between foods that have supposed benefits and foods that have truly, documented benefits. Sticking to science (and paleolithic principles of course), allows us to allocate our precious time to the foods most likely to offer maximum benefit..

Coconut oil is one of these foods. Although you have most likely heard a lot of chatter about the benefits of coconut oil, I wanted to share only the empirically-documented benefits so that you can feel very confident about its therapeutic effects every time you use it.

A study in the Journal of Medicinal Food (2007) concluded that, “coconut oil should be used in the treatment of fungal infections in view of emerging drug-resistant Candida species.”

If you suffer from Candida, try adding a teaspoon to your morning shake or nightly tea.

A study conducted in 2002 concluded that “coconut oil is particularly useful (for wound healing) because of its biochemical structure: unlike olive oil and animal fatty tissue, it consists of short-chained and saturated fatty acids.”

If you have a cut that you need to protect from infection, coconut oil may be just the answer!

A study conducted in 2004 demonstrated that coconut oil was as effective as mineral oil for the treatment of Xerosis, a common skin condition characterized by dry, rough and itchy skin. I can vouch for this! I have incredibly dry skin. Since using coconut oil as my primary moisturizer, my skin stays hydrated longer and even glows!

A randomized, double blind trial conducted in 2009 showed that women who supplemented daily with 30 mL of coconut oil had improvements in blood lipid profiles and a reduction in waist circumference. Anyone trying to lose that spare tire should jump on the coconut oil bandwagon pronto!

A study conducted in 2004 by Reger et al., demonstrated that supplementing with medium chain triglycerides (found in coconut oil) improved paragraph recall in patients with Alzheimer’s disease. I made my grandmother start using 1 teaspoon of coconut oil in her morning tea about a year ago. At 88 she is still sharp as a tack!

6. Reduces effects of chemotherapy and improves quality of life for breast cancer patients.

An open-pilot study conducted in 2011 revealed that supplementing with virgin coconut oil was effective for reducing visceral (belly) fat in men. Did I mention that visceral fat is the most dangerous kind? A daily teaspoon of coconut oil could be just what you need to finally get rid of that stubborn belly.

A comparative trial conducted in 2012 demonstrated that coconut oil was more effective at increasing the uptake of tomato carotenoids than safflower oil. The authors credit the medium chain fatty acids for this effect. I like to add coconut oil to any smoothie I make for the same effect!

A study conducted in 2005 showed that mice fed coconut oil lost more fat when given CLA. Again, if you’re trying to lose fat, coconut oil is a great strategy!

An animal study conducted in 2012 showed that coconut oil provided health benefits in cardiovascular treatments. Another study conducted in 2004 also showed that virgin coconut oil effectively reduced cholesterol, triglycerides, LDL and VLDL and increased HDL. These are indicators of a reduced risk of cardiovascular disease. Because heart disease is our #1 killer today, coconut oil might also be considered one of the most therapeutic foods we have!

A study published in the journal of Experimental and Therapeutic Medicine, a study entitled “Antistress and antioxidant effects of virgin coconut oil in vivo,” found that virgin coconut oil was as effective as Diazepam (a commonly prescribed psychiatric drug) for reducing stress in mice. Given that it comes free of side effects (which is rare with psychiatric medications), I’d say coconut oil is  a great place to start in combating stress!