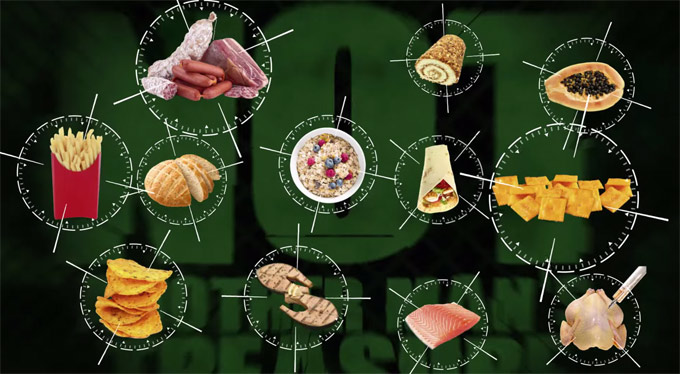 10 American Foods That Are Already Banned in Other Countries

So let's break down each individual ingredient below.

My Take On This:

In addition to the intestinal damage and massive tumors found in animals who eat GMO papaya (as well as the contaminated non-GMO papaya crops) grown in Hawaii, studies also suggest that the altered genes in GMO papaya may be an allergen to humans. According to this article entitled, GE Papaya Causing Plenty Problems For Hawaii  by the Organic Consumers Association...

"The Institute for Science in Society, a London-based anti-GM organization, published a Web article entitled “GM Papaya Scandal,” by Joe Cummins, Professor Emeritus of Genetics at the University of Western Ontario. In it, Cummins alleged that a transplanted protein in GM papayas might provoke allergic reactions in humans, but that the Environmental Protection Agency had allowed them to be released without investigating that possibility.”

“...As part of the approval process, potential allergens have to be identified before the crops are released commercially,” Cummins wrote. “But the GM papaya was approved despite a recent report showing that the papaya ringspot virus coat protein is a potential allergen, because it contained a string of amino acids identical to a known allergen.”

Be sure to avoid these risks by purchasing organic papaya and avoiding GMO varieties (Rainbow and Sunup).

Ractopamine is linked to reduction in reproduction function, increased mastitis in dairy herds and increased death and disability. According to Dr. Mercola, other risks include…

"Ractopamine is also known to affect the human cardiovascular system, and is thought to be responsible for hyperactivity. It may also cause chromosomal abnormalities and behavioral changes. According to the Russian news source Pravda,7 the drug may cause food poisoning, and Center for Food Safety (CFS) states that8 "[d]ata from the European Food Safety Authority indicates that ractopamine causes elevated heart rates and heart-pounding sensations in humans."

and as reported by NBC News,

“Since it was introduced, ractopamine had sickened or killed more than 218,000 pigs as of March 2011, more than any other animal drug on the market, a review of FDA veterinary records shows. Pigs suffered from hyperactivity, trembling, broken limbs, inability to walk and death, according to FDA reports released under a Freedom of Information Act request.”

According to this video, other countries take the health risks associated with ractopamine more seriously than we do in America. There actually were riots in the streets of Taiwan when the ban on American meats was lifted. Russia, China and the European Union are also adament about the fact that the American meat they receive is ractopamine-free. Despite these concerns, most conventionally raised meat produced in the US is not even tested for ractopamine. The FDA has even established “tolerable” levels. It’s time to wise up by avoiding conventionally raised beef, pork and turkey all together!

As stated in the video, BVO was originally patented as a flame retardent and is linked to major organ damage and birth defects. These reasons alone are enough for me to avoid it, but there are also a few compelling case studies worth mentioning. According to an article entitled, Brominated Vegetable Oil Q&A on WebMD:

"In 1997, doctors were stumped by the case of a man who came to the emergency room with headaches, fatigue, and a loss of muscle coordination and memory. He continued to get worse over time, and eventually he lost the ability to walk. A blood test found sky-high levels of bromide. The source? The man had been drinking between 2 and 4 liters of soda containing brominated vegetable oil every day. He needed dialysis but eventually recovered."

"In 2003, doctors treated a man who developed swollen hands with oozing sores. They diagnosed a rare case of the skin condition bromoderma after blood tests revealed his bromine was about twice normal limits. The man admitted drinking about 8 liters of Ruby Red Squirt, which contains BVO, each day."

Even though it isn't likely that you are consuming BVO in the amounts that these patients were, it is still risky to consume it in any amount. Just avoid it.

Also stated in the video, more than 3000 chemicals and food additives (colorings and flavorings) are added to American foods. Research has associated them with behavioral disorders, birth defects, cancer, and hypersensitivity reaction in kids. Aside from these deleterious effects, perhaps the most troubling aspect of the numerous food additives in our food supply is their cumulative effect. Although some additives may be safe when consumed in small amounts, when you eat processed foods, you are actually consuming more than you think. With over 3,000 additives currently used in food manufacturing, you can be sure that you are getting a steady dose with its long-term and cumulative effects yet unknown. Play it safe!  Avoid all processed foods with questionable additives, chemicals, dyes, colorings and flavors.

Arsenic-based drugs have been used since 1944.  They were meant to ensure quick animal growth and to make meat appear fresher. A 2007 study revealed that chickens fed an arsenic-based drug called “roxarsone” could convert into the most dangerous form of inorganic arsenic in chickens, a known carcinogen (cancer-causing agent). According to an article entitled, Newly Released Documents Reveal Collusion Between FDA and Pfizer on Arsenic-Based Animal Feed:

There is simply no reason to take the chance.

This was added to make baking dough more elastic. Potassium Bromate is associated with kidney and nervous system damage, thyroid issues and cancer.

A calorie and cholesterol-free substitute used in fat-free snacks, Olestra depletes carotenoids and fat soluble vitamins. It has been linked to adverse intestinal reactions.

This synthetic hormone has been used to increase milk production and has been linked to colorectal, prostate and breast cancers.